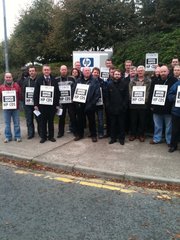 Engineers and technicians employed by HP Customer Delivery Systems are engaged in the first of two 24-hour work stoppages today in protest at the refusal of management to engage with their trade union, IBOA, on a number of important issues.

The workers provide essential maintenance services throughout the country for a range of electronic equipment including bank ATM machines and Point-of-Sale devices in shops, for computer systems in a number of Government Departments (including the processing of social welfare cheques) as well as for the ESB's national grid and for mobile phone service providers, Vodafone, O2 and Meteor.

HP CDS staff have raised concerns over job security, redundancy terms, pay, possible transfer and redeployment, as well as the general management culture and issues relating to dignity and respect at work.

Management has signalled its intention to renege on an existing collective agreement with the Union and has rejected a recent Labour Court Recommendation urging HP CDS to engage in effective dialogue with the Union.

"Our members would much prefer to be using their considerable technological expertise for the benefit of their customers. But the prehistoric approach to management being adopted in HP CDS in refusing to engage in serious discussions of our members' key concerns has left them with no alternative but to take industrial action.

"IBOA has repeatedly indicated its willingness to negotiate. But management has refused to enter into meaningful talks by rejecting the best efforts of the Labour Court and seeking to rescind previous agreements with the Union.

"The stance taken by management in HP CDS is all the more surprising because IBOA has developed a constructive relationship with the management of the parent company, HP, on behalf of our members directly employed there."

A second work stoppage will take place on Thursday unless meaningful negotiations begin in the meantime.