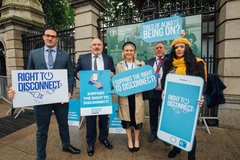 The Financial Services Union (FSU) has marked World Mental Health Day by launching a call for legislation on the “right to disconnect.” The union insists that workers should not be obliged to answer calls or reply to emails, or engage in any work-related activity outside of paid working hours. The call comes out of a major report called “Technology, Work and Skills: The Impact of Technology on Employees” by the University of Limerick, which was commissioned by the FSU.

Head of Industrial Relations and Campaigns with the FSU, Gareth Murphy said:

“The report by the University of Limerick calls for measures to be put in place which prevent the overuse of technology. We are calling on the Minister to introduce legislation on the right to disconnect, which would compel employers not to abuse contractual working hours by overuse of technology.”

Speaking about the report, Dr Michelle O’Sullivan of the Kemmy Business School at the University of Limerick said:

“This report comes out of research conducted with almost 2,000 survey respondents from across the finance and tech sectors. There is indication of real concern about the impact of technology at work. It is clear that the majority of workers surveyed feel their employer will take steps to automate or replace elements of their role in the future.  There is little evidence that respondents feel their employers have taken steps to introduce measures to restrict overuse of technology for work purposes. Only 7.4% of those surveyed felt that their employer had engaged in some effort in this regard. “

“We are recommending that employers pay more attention to upskilling and reskilling workers, and ensure measures are put in place to prevent the overuse of technology. “

About the FSU: The FSU is the leading trade union across banking, finance and technology.

About “Technology, Work and Skills: The Impact of Technology on Employees.”

The research contained in the report was conducted in the first quarter of 2019. Almost 2,000 participants took part a survey which assessed views on technology ay work. The research team was Dr. Michelle O’Sullivan, Dr. Juliet McMahon, Dr. Caroline Murphy, Dr. Lorraine Ryan and Dr. Jonathan Lavelle. They are members of the Kemmy Business School, University of Limerick. They founded the Quality of Work Research Cluster which examines the quality of work in Ireland as well as public policy and the regulation of work. They have previously undertaken research projects on zero hours work, HR analytics, gender equality, workplace bullying, young precarious workers, employment relations in multinational companies and workplace partnership.

Key recommendations in “Technology, Work and Skills: The Impact of Technology on Employees.”

Over 36% of respondents indicated that their employer had not provided training and development in relation to technology. These results are concerning given the repeated calls in international studies and by national and international organisations for investment in upskilling and reskilling of workers.

The survey results suggest that there are a lack of measures in organisations addressing the over use of technology and a lack of protections for workers around out-of-hours technology. Only a small proportion of survey respondents indicated that their employer had established measures to prevent the over-use of technology.

The survey results revealed that that women and men had some different experiences of workplace technology. Men were more likely to report answering calls/emails outside work hours while women were more likely to expect there would be a significant level of automation of their role and that their work was being monitored through technology. These differences may also reflect diversity in sub-sectors and occupations. Higher proportions of female respondents worked in retail banking than men, while more men reported working in areas like professional/technology services, insurance and funds.

While the Government has recognised that the development of skills must match the needs of workers as well as enterprises, the absence of collective bargaining obligations on employers means that the needs of workers may not be adequately considered. The important role for unions is recognised internationally, with the ILO recently arguing that negotiations between unions, employers and government can help ensure that workers should “get a just share of economic progress, that there is respect for their rights and protections against risk in return for their continuing contribution to the economy”.