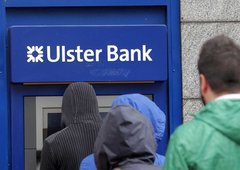 Ulster Bank today announced the closure of 11 bank branches across Northern Ireland.  The closures are focused on largely rural areas in Northern Ireland and, more often than not, this move by Ulster Bank will see the last bank in town closing its doors.

FSU Senior Official Gareth Murphy stated, ‘Today’s announcement is deeply disappointing for these communities as well as for the staff working in these locations. Our immediate priority is to protect jobs and avoid compulsory redundancy.  However, we also are cognisant of the impact branch closures have on rural communities. Studies have shown that lending to SMEs is reduced by 64% where a branch closes and this reduction is even higher when a town has no bank left[i]. These 11 closures come on the back of nine announced earlier this year.  When the latest series of closures is finalised Ulster Bank will have closed 50% of its NI branch network since 2013.

“We have secured the commitment from the Bank that these will be the only closures in 2018 and that they have a number of redeployment and role opportunities to avoid compulsory redundancies. The likely number of voluntary redundancies will be in the region of 40 out of about 65 staff impacted.’

General Secretary Larry Broderick has repeated his call for a strategic plan for the future of branches[ii] “It is important to remember that Bank of Ireland, First Trust Bank and Danske have all closed a significant number of branches in recent years, often leaving Ulster Bank as the last bank in town.  Unfortunately, this announcement will mean that seven communities will now see their final bank close.  Closing down a bank in a community has a very significant impact.  We can’t just allow banks make that decision based on short-term, cost saving criteria.  Too much is at stake for a local community.

“Ulster Bank should immediately publish its impact assessment reports on the closures this year and, at the very least, put in place additional mobile bank for the areas worst hit.  What is more I will be writing to Ulster Bank and its parent RBS demanding that it gives, at a minimum, a three year commitment to retain its remaining branch network.

“In the meantime we need to bring all stakeholders together to chart a future for banking and financial services in Northern Ireland.  FSU is ready to play its part.

The Bank have announced their intention to close 11 Branches in Ulster Bank Northern Ireland.

[ii] FSU’s submission to the Assembly on the future of banking https://www.fsunion.org/updates/2017/02/16/fsu-policy-paper-on-banking-and-financial-services/