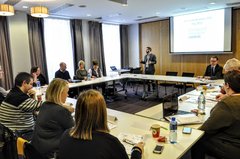 The Financial Services Union today announced that it is to put a revised pay proposal to a ballot of members in the Republic of Ireland.

The union had previously suspended a ballot of members on the pay deal.  This action was taken after it emerged that Ulster Bank had commenced implementation of new pay ranges.

Talks to resolve the dispute took place between Ulster Bank and the Financial Services Union over the past week and the union is now in a position to put the revised pay range proposal to members in a ballot.

According to Gareth Murphy, Senior Industrial Relations Officer with the union, “the revised pay proposal has been reached through detailed negotiations with Ulster Bank over the past week.  There are positives to the overall proposal :

“Our honest assessment for members is that this is the most that can be achieved at present through negotiation and on that basis we are prepared to put it to a ballot of members," concluded Mr. Murphy.