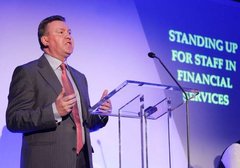 At a time when short-termism seems to dictate much of our domestic and international politics kudos are due to Minister Eoghan Murphy who published the 2017 Action Plan for Ireland’s International Financial Services Sector last week.

The plan is part of a five year strategy to develop International Financial Services and create 10,000 new jobs by 2020.  Like much else these days the uncertainty of Brexit is a dominant theme in the Action Plan, as we anticipate what Donald Rumsfeld might call “known unknowns”.

That said in general terms the Action Plan is to be welcomed.  There are 40 actions in total - some more worthwhile than others - but overall it outlines a clear path for 2017.

In particular our union welcomes the focus on skills and education in the Action Plan.  There is a commitment to expand the new Irish Financial Services apprenticeship programme, develop post graduate qualifications in International Financial Services Law and Aviation Finance & Leasing and continue with the new qualifications in Fintech offered through the National College of Ireland.

A skilled workforce is probably the most important driver of financial services and the foresight that the Action Plan shows in this regard is commendable.

Unfortunately, though the Action Plan doesn’t go far enough in outlining the type of jobs we want to create or indeed the type of industry we want to develop.

If we are determined to create 10,000 new jobs then let’s set the bar high.  Let’s create 10,000 high-quality, well-paid, sustainable jobs in a well-regulated, tax compliant sector that doesn’t repeat the mistakes of the past.

Let’s face it is not so long ago Ireland’s reputation was damaged by a minority of the financial services operations located here.  The New York Times threw out the phrase the ‘financial Wild West’ and the mud stuck.  The subsequent economic crash and banking crisis also lifted the lid on practices and attitudes within our domestic banking structure that no one wants to see repeated.

The numerous reports into the banking crisis have documented what went wrong.  But there’s a more important piece of work to do – we now need to set out what we want to get right – in terms of domestic banking and international financial services.

From my union’s point of view this includes changing the culture of banking to ensure that important issues such as dignity at work and the role of the branch network in rural communities is given priority.  It means having a pay strategy in the industry that prevents the gross disparity in salary ratios between those at the top and new entrants starting their careers.  It means attracting financial companies that contribute to the wider Irish economy, and aren’t just trading silos in the docklands isolated from the rest of the country.

The Minister’s Action Plan is a step in the right direction.  But in reality we can’t deal with international financial services in isolation from the domestic banking sector.  We need a vision for Irish banking for the next 10 years that includes both international and domestic operators and recognises their interconnectedness.  It should also recognise the voice of customers and staff in charting the future of banking – which at the moment is sadly lacking.  The Financial Services Union has repeatedly called for a strategy for banking and financial services for the next 10 years – we hope the Minister and others are listening.