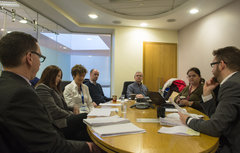 The Financial Services Union and Ulster Bank have been in challenging pay talks for the last number of months which have culminated in a recommendation from independent mediator Mr Kieran Mulvey.

Within the context of the Ulster Bank pay structure Mr Mulvey has recommended a pay matrix which should deliver on average an increase in the region of 2.5% for staff. But significantly FSU has secured that more staff will be included in the pay structure and eligible for either an increase or a non-consolidated cash payment.

In addition to its pay claim the Union tabled an outstanding disputed pension cost which the Bank is passing on to members. Mr Mulvey, in making his recommendation on the pay matrix, has recognised this claim and factored it into the matrix resulting in the NI matrix being marginally better than the recommended Republic of Ireland matrix.

In addition to the pay matrix, pay ranges were also under discussion and Mr Mulvey has recommended a set of ranges discussed during mediation and has improved a number of positions on these ranges. While FSU has reservations on some of these ranges points it was felt in the round enough to put to members to democratically decide upon through a ballot commencing next week.

FSU Senior Official Gareth Murphy commented, ‘The recommendation from Mr. Mulvey represent an improved position to those originally proposed by the bank.  Following consultation with our members, we feel it is enough to ballot on.  Importantly the mediator took on a board our arguments on the pension cost the Bank was passing on to members in recommending the matrix he did. Through this recommendation we are securing increased pay and that is a good thing for staff and for the economy in Northern Ireland.’

FSU General Secretary, Larry Broderick, added ‘The recommendation from Mr Mulvey is clearly a genuine attempt by the mediator to resolve a serious dispute on pensions which we will be putting to members to ballot on.”